https://www.podbean.com/media/share/pb-bf62d-f0c190 Meet Rust College interns Quento Annan and Irene Njengo. Here, they discuss what they learned their first year at the college, participating in the wRIGHTing Reconstruction project, funded by the Council of Independent Colleges.

The Nature of the Work of Transcribing Slave Names

The title of this post is ironic as I’m not sure there is anything natural about one person “owning” another. However, as I transcribe contraband camp registers, noting next to each freedperson the name of their “former owner,” I am lending regularity to something that would otherwise feel very strange. … Continue Reading The Nature of the Work of Transcribing Slave Names

Hennig Cohen, of the University of South Carolina, refers to a “dual naming system among slaves in the eighteenth century” (103). Enslaved persons might have an English name but also have a nickname (“country name”) that might be African or African-influenced. Hennig’s study is based on names found in the … Continue Reading Hennig Cohen on S.C. Slave Names* 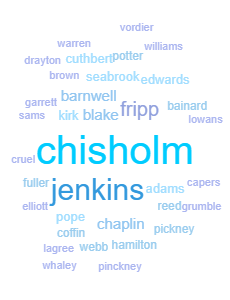 I tend to think that a month name might not have indicated the actual month of birth. Rather, the month could stand for something like “first,” winter, cold, Janus, etc. I think there are all sorts of possibilities and what was most important was what the word symbolized.

From the beginning of the Civil War, the Kentucky slaves were active participants in the drama. From the moment northern troops entered Kentucky, the objective of the slaves was to secure more self-determinism for themselves and their families.